Meet Hamed, again. I mentioned him in my 20s Twenty SnapShots and 10-day blog challenge. But, I didn’t see this one coming; an entire entry devoted to him. In the first place, if it weren’t for Ate Gloria, I wouldn’t be friends with Hamed. For some reasons, I feel awkward to be with people I really find handsome. When Ate Gloria wasn’t part of our class yet, me and Hamed were just nodding acquaintances. He was friends with Bartusz, my first friend among my classmates, but it was just them. They even talked about me; I overheard them talking. Good thing that it was nice stuff. Dahil kung hinde, inuntog ko ulo nilang dalawa. Then Ate Gloria came, she became friends with him. Since I always tag along with her, we eventually became friends, too. We do what usual friends do; help each other, share stuff. But, it was last Wednesday that somehow the level of our friendship got a little higher. Nag level up ang asaran na aming nalalaman.

Being friends, we usually share food with each other. But, last Wednesday, he totally surprised me. After giving him the notes from last Monday (he had to leave earlier), he went out of our classroom and got a plastic cup. I didn’t imagine that he took that cup for me. He asked me if I want a drink. I asked him what he had. I actually didn’t get what he answered, so I didn’t say yes or no. But, he poured a drink on the cup and insisted that it’s mine and I should taste it. I dunno why he offered the drink, if it’s his thank you or what. But, it really came as a surprise, because he doesn’t usually share his drinks.

Being friends, he would usually mess with me by messing my stuff; like putting my phone on silent mode or deactivating the silent mode. I would hit his arm as payback. This time around, he messed with me by poking me at my side. I’m ticklish there. And I won’t have it. So, I poked back… And his ticklish on the side, too. So, umiiwas ang mama. Eh di nga ako patatalo. Ang likot-likot tuloy namin. Maybe, we bothered our classmates… I think we actually did. Hahaha!!!

Being friends, there are times that when me and Ate Gloria would bump into him in the Walking Street, we (Hamed and me) would bike home together, not the whole way though. I never tried biking home with him from the school. But last Wednesday, that’s what we did. I didn’t think he’d bike home from school with me. He’s usually out of the gate before I could even use my helmet. So, being used to that, I was taking my time in getting my bike from the shed (he parked somewhere else). Suddenly, he popped in the shed and told me to get going, apparently, we’re biking home together. He told me he’s going to the Walking Street and asked if I wanna come. I said, I would if I could, but I don’t have time. So, I suggested that we hangout on Friday instead because it’s the Havnekulturfest and there’s a concert. He answered, yeah, maybe. And I told him no maybes. Hahaha.

So, came Friday. We were messing with each other again. And I reminded him about the Havnekulturfest. Our teacher also showed the program to us. And he was like, let’s just see because the weather doesn’t look good. But, I disagreed and said, “Maybe, it would be sunny tonight.” And he was like, “Sunny, tonight?” And I realized, oo nga naman, night nga eh kaya paano magiging sunny. Bloopers. We had a laugh and hitting fest over it… well, me doing the hitting, him avoiding. But, but, but… It was actually sunny last night. Hahaha! The sun set around 10PM and we were at the concert like 7PM to 8PM. I realized that while writing this, so I texted him about it. Nothing important really. That was just me saying ’cause I wanted him to know. Hahaha!

Then, class is over. So, we were like, “okay I’ll see you later. Just call or text”. I went with Ate Gloria to the restroom, thinking he went home already. Only to find out when we got out of the building that he was waiting for me, for us. He thought I might wanna go to the Walking Street. Since, before going out of the building, Ate Gloria and me, thought of going there, the three of us went together. Well, it was almost lunch, and we passed by a lot of food stalls and restaurants, our taste buds were tickled. So, we decided to grab a lunch and eat together, minus Ate Gloria because she had to go to her brother-in-law. We decided to eat at Jensens Bøfhus. That was my first time to eat there. Om nom nom. They serve mouth-watering dishes. Worth the price. And it’s actually affordable. Moms! I find it amusing that he actually saved me some of the rejecocktail (shrimp cocktail) he ordered for himself. When our order was served, he asked me if I wanted to taste the meal he has. I said, sure, and asked him the same thing. Well, he said he won’t ’cause he’s not really into chips. I had Kylling med Nachos (Chicken with Nachos). Anyway, after tasting his food, I said it tastes good. And went back to finishing mine. I noticed that he didn’t touch the rest of the rejecocktail. But, I was oblivious to the fact that it was meant for me. When the server came and asked if she can now clear the table and asked if we still want the rejecocktail, he said, yeah, we still want it and that it was mine. Doon ko pa na-discover na akin pala yun. Surprise-surprise! Nope, I didn’t eat it, not because I don’t want to but because I can’t. I was already full with the dish I had. So, he had to finish it himself.

We talked of stuff we could think of. I learned more about him. And of course, we talked about the evening’s event, too. He said that his friends might go to. He asked me if my friends are coming. I told him, they might, but I’m not sure. So, he better come or else I would be alone. Tinawanan lang ako. He actually didn’t commit that he would go, although he said yes just to stop me from pestering him. It’s just me putting on the impression that he did. Para naman medyo wala siyang kawala. Paganahin ang charm at ang pagiging manipulador. Paminsan-minsan lang naman. Manipulate din pag may time. Hahaha! So, we set a place and time where we would meet and, thank God for the advent of high-technology, we went through the “Just call or text later, okay”.

Although we already have an agreement, I know, that if something’s up, there’s the possibility that he wouldn’t come. So, I readied myself in case I have to go alone. Mabuti na ang handa para hinde nase-stress ang bangs. However, thanks to the gods of procrastination for not putting a spell on him, he actually came. He said that he wanted to text me that he couldn’t come, because there are 3 Iranian girls that invited him out, too, but he declined and said he’s not going to the city. He doesn’t want to be seen. But, he came anyway, for me. Hahaha! So, he was kinda preoccupied the whole time and there were a lot of people out, too, who know him. He seemed so helpless. Being a good friend, I had a great laugh at his predicament. Meanie!

He was like, let’s get out of here (the Walking Street). So, I asked him, where do you wanna go? He said, wherever. So, I told him, let’s just go to the concert. After, 2 or 3 songs, he wanted a beer. So, we went to a convenient store nearby and bought beer. I couldn’t open my can. Dang! So, I asked him to open it for me. Dahil nga wala sa hulog ang utak niya, namali ang pagbukas niya sa lata. Kinailangan pa niyang mag-effort ng bongga mabuksan lamang ito. And guess what? He actually met one of the girls he said no to. Hahahahahahaha! And take note, there’s more, that was the girl that wanted him to be her boyfriend. Ehrmergerd. Mwahahahahaha! Busted! Poor Hamed.

Then, time’s up. He had to go to football. So, he had to leave. But, before leaving, he shook my hands. That was a first. We don’t usually do that. But, hey, whatever. It was fun hanging out with him. I learned more about him during that day. Stuff that I wouldn’t imagine he did. Stuff that made me see his soft and tough side. It was nice getting to know him more and Iran… ’cause we talk about Iran and Philippines, too.

So, Hamed, it was cool hanging out with you, maybe, we should do this again next time. 🙂 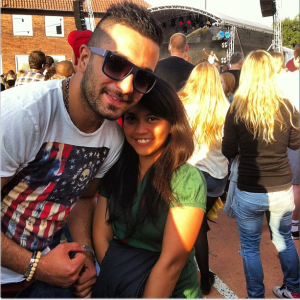 Springtime in Odense. Reggae concert at the Havnepladsen for the Havnekulturfest.

Experiencing the world in bits and pieces

live life to the fullest

Life's rules aren't what you think they are.

a tunnel, no matter how seemingly long, is still a tunnel.. unless it turns out to be a cave.

“Dwell on the beauty of life. Watch the stars, and see yourself running with them.” ― Marcus Aurelius

The Art and Craft of Blogging

in the eyes of a four-eyed monster

The latest news on WordPress.com and the WordPress community.